Sympathy-Face: how not to greet a retired skater

I recently went to a BDD bout for the first time in months. Much like previous bouts this season, Pelvis had to be there before doors opened to do announcer-things. I therefore became the derby widow sitting in the stands reading a book until the doors opened and the rest of the audience poured in. As Pelvis so eloquently wrote, that's part of the job, and I was happy to show my support. During my wait for the lights to dim I saw a lot of familiar faces, and it was nice to say hello to former teammates and opponents. Then it all went down the tubes when I started getting greetings that opened with and/or entirely consisted of the facial expression shown below. I chose to display it in LOLcat form to spare the look-givers, because they knew not what they did:

Nine people greeted me like this before the first bout even started. Every conversation followed the same script: "Heeeeeeeyyyyy, so......... how are you doing? Are you ok?" [cue face reserved for the terminally ill]. At first it was confusing (did I do something wrong?), then alarming (do I look sick?!), and then it just got really, really awkward because I kept responding with "I'm fine. Why shouldn't I be??!?!" [cue angry eyebrows and awkward silence]

I know that Sympathy-Face is meant to express compassion. It's reasonable to think that a person who once loved skating probably feels weird when they can't cross the "skaters only" caution tape. Maybe my previous "Looking Under the Blanket" post made everyone think I was going to be perpetually miserable without derby in my life? I mean, sure, I was bummed to go out the way I did, but life after derby has been pretty sweet since then. No need to send flowers or buy me mylar balloons. I'm not dying, I swear.

Looking back, I admit that I was downright rude to some of these well-meaning friends. If I was a jerk to you, I apologize. I was wrong to respond the way I did, and the next time I see you face to face I'll make sure to tell you personally, too. It's just that by the end of the night I had gotten over twenty Sympathy-Face greetings and it drove me nuts.

I understand that greetings like this are well meant. What I need other people to understand is that the meaning doesn't always come across. Here are a few examples of how I've been greeted at derby-related events since my retirement:

What you probably mean: I'm so sorry that you're not playing anymore. I know how much you loved it, and it was sad to see you go. I hope you're doing ok, and I also hope that being in the stands tonight doesn't make you sad.

What it sounds like: Wow, you must be so miserable right now - you look awful. Do you think you can handle being at a bout tonight? I hope you can hold on until at least halftime before walking in front of a train with a suicide note taped to your chest.

What you probably mean: It's so nice to see you again. I've missed skating with/against you and I'm glad you're here.

What it sounds like: I have missed skating with/against you and it means a lot that you came to see us play. I've missed your contribution to the league, but you seem to be enjoying your retirement because you are an emotionally stable individual.

What you probably mean: I'm really glad you're here. I hope your life outside of derby is fulfilling and I would like to know more about it.

What it sounds like: I'm glad to see you because I have missed you personally as well as professionally. I hope you're happy now that you no longer have to juggle the hard work of balancing derby and your personal life. I care about your life outside of derby because you matter as a human being and not just a skater, and I would like to know the details of your various exploits because I care about you.

Before you think it was a giant awkward-fest, I got plenty of good greetings, and a bunch of great ones. It meant a lot to get those sincere hugs and high fives, believe me. Of course being at a bout is weird and a little awkward when all of your friends are skating/working and your knees hurt because you've been sitting in an oddly-shaped plastic seat for five hours. Still, it feels a lot more awkward when everyone is looking at you like you're bleeding out on the sidewalk after a particularly nasty car accident, and none of them want to be the one to tell you that no one can save you.

I was about to end this post here, but I was reminded about a certain bit by Louis CK about divorce that is so apt I had to include it, even at the risk of making this post unnecessarily long. Readers with ADHD (like me) bear with me:


Let me tell you something. And this is important because some day one of your friends is gonna get divorced. It’s gonna happen. And they’re gonna tell you, don’t go “Oh I’m sorry!” that’s a stupid thing to say. It really is. First of all, you’re making them feel bad for being really happy, which isn’t fair. And second, let me explain something to you. Divorce is always good news. I know that sounds weird, but it’s true because no good marriage has ever ended in divorce. It’s really that simple. That’s never happened – THAT would be sad. If two people were married and they were really happy and they just had a great thing, and then they got divorced, that would be really sad. But that has happened zero times. Literally zero. Ray Charles has killed more jews than happy marriages have ended in divorce. So if your friend got divorced, it means things were bad and now they’re – I mean, they’re better. They’re not good. Life is shit wall to wall. But they’re better, so you should be happy.

After I watched that bit, a friend of mine told me she was getting divorced. My initial impulse was to give her Sympathy-Face and say "oh hon, I'm so sorry," but I backed up the truck and said "congrats" instead. Her whole face lit up, she grabbed my hands, and she thanked me for being the first person to say what she most wanted to hear. Why am I bringing this up? I think quitting derby is a lot like getting divorced. Bear with me here, because I'm still happily married to my first husband and both of my folks are still together, so if I'm wrong, I'm wrong.

Still, think about it. Isn't derby like an intense relationship? It enters your life, takes it over, brings out the best in you, and utterly transforms you in that one plus one equals two way that a strong relationship does. Then the honeymoon period is over and reality sets in - derby starts to take more than it gives back, and the weird little habits that used to be cute start to get irritating. Then you break up, and you're leaning out the second floor window throwing your old hot shorts out into the rainy street, or you're on the other side of a slammed door next to a pile of your old wheels, or you're shaking hands amicably with your ex after working out which days you can visit your local rink so you don't bump into her during couples' skate with her new squeeze. Finally you're at a bout having that awkward, hands-buried-in-the-pockets conversation with the friends you met through derby, because what else do you have in common now besides talking about your ex?

No one leaves derby because everything is working great. Maybe your body is busted all to pieces and you need to heal up. Maybe your heart is turned inside out and you need to start spending time with people who give more than they take. Maybe you're just really, really tired and you want more time to do things just for you. Hell, maybe you quit because it was a good stopping point and you wanted to avoid all of the previous outcomes. No matter what, you quit because things could only go downhill from here. Isn't that a good thing?

It's the end of the derby season for a lot of skaters in New England, and a lot of your teammates and opponents will be signing divorce papers. Maybe you will be one of them this year, maybe not. I hope it's amicable for everyone, because those throwing-crap-out-the-window divorces suck. Whether you're still derby-ing or not, try congratulating the next skater who tells you s/he's retiring. Ask that former teammate you haven't seen in a while how s/he's enjoying retirement. I'll bet s/he'll thank you.

And honestly, my derby retirement is really, really great. I get to sleep late on the weekends, I smell nice most of the time, I have all my toenails again, my pets recognize me, and I see my husband while it's still light out most days. Getting divorced from derby was hands-down the best derby-related decision I made since marrying derby in the first place. Don't worry, guys. I'm fine.

I retired this summer, and when I saw girls from our league a month or two later, they all seemed to greet me with, "Whhhhyyyy?" and "I'm so sad!" Geez, guys. If you wanna hang out, text me.

Nice site, very informative. Would you please consider adding a link to my website on your page. We are happy to offer you a 10% discount to our Online Store if you do so. Please email me back and I would be happy to give you our link. 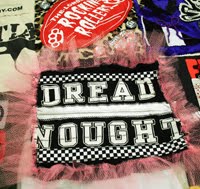 Click on the image above to visit my quilt blog!

Promote Your Page Too